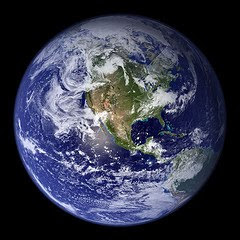 (A Negro Sermon)
And God stepped out on space,
And He looked around and said,
“I’m lonely—
I’ll make me a world.”

And far as the eye of God could see
Darkness covered everything,
Blacker than a hundred midnights
Down in a cypress swamp.

Then God reached out and took the light in His hands,
And God rolled the light around in His hands
Until He made the sun;
And He set that sun a-blazing in the heavens.
And the light that was left from making the sun
God gathered it up in a shining ball
And flung it against the darkness,
Spangling the night with the moon and stars.
Then down between
The darkness and the light
He hurled the world;
And God said, “That’s good!”

Then God himself stepped down—
And the sun was on His right hand,
And the moon was on His left;
The stars were clustered about His head,
And the earth was under His feet.
And God walked, and where He trod
His footsteps hollowed the valleys out
And bulged the mountains up.

Then He stopped and looked and saw
That the earth was hot and barren.
So God stepped over to the edge of the world
And He spat out the seven seas;
He batted His eyes, and the lightnings flashed;
He clapped His hands, and the thunders rolled;
And the waters above the earth came down,
The cooling waters came down.

Then the green grass sprouted,
And the little red flowers blossomed,
The pine tree pointed his finger to the sky,
And the oak spread out his arms,
The lakes cuddled down in the hollows of the ground,
And the rivers ran down to the sea;
And God smiled again,
And the rainbow appeared,
And curled itself around His shoulder.

Then God raised His arm and He waved His hand
Over the sea and over the land,
And He said, “Bring forth! Bring forth!”
And quicker than God could drop His hand.
Fishes and fowls
And beasts and birds
Swam the rivers and the seas,
Roamed the forests and the woods,
And split the air with their wings.
And God said, “That’s good!”

Then God sat down
On the side of a hill where He could think;
By a deep, wide river He sat down;
With His head in His hands,
God thought and thought,
Till He thought, “I’ll make me a man!”

Up from the bed of the river
God scooped the clay;
And by the bank of the river
He kneeled Him down;
And there the great God Almighty
Who lit the sun and fixed it in the sky,
Who flung the stars to the most far corner of the night,
Who rounded the earth in the middle of His hand;
This Great God,
Like a mammy bending over her baby,
Kneeled down in the dust
Toiling over a lump of clay
Till He shaped it in His own image;

Then into it He blew the breath of life,
And man became a living soul.
Amen. Amen.

(Genesis, Chapter 1)
1:1 In the beginning God created the heaven and the earth.

1:3 And God said, Let there be light: and there was light.

1:4 And God saw the light, that it was good: and God divided the light from the darkness.

1:5 And God called the light Day, and the darkness he called Night. And the evening and the morning were the first day.

1:6 And God said, Let there be a firmament in the midst of the waters, and let it divide the waters from the waters.

1:8 And God called the firmament Heaven. And the evening and the morning were the second day.

1:9 And God said, Let the waters under the heaven be gathered together unto one place, and let the dry land appear: and it was so.

1:10 And God called the dry land Earth; and the gathering together of the waters called he Seas: and God saw that it was good.

1:11 And God said, Let the earth bring forth grass, the herb yielding seed, and the fruit tree yielding fruit after his kind, whose seed is in itself, upon the earth: and it was so.

1:12 And the earth brought forth grass, and herb yielding seed after his kind, and the tree yielding fruit, whose seed was in itself, after his kind: and God saw that it was good.

1:13 And the evening and the morning were the third day.

1:14 And God said, Let there be lights in the firmament of the heaven to divide the day from the night; and let them be for signs, and for seasons, and for days, and years:

1:15 And let them be for lights in the firmament of the heaven to give light upon the earth: and it was so.

1:17 And God set them in the firmament of the heaven to give light upon the earth,

1:18 And to rule over the day and over the night, and to divide the light from the darkness: and God saw that it was good.

1:19 And the evening and the morning were the fourth day.

1:20 And God said, Let the waters bring forth abundantly the moving creature that hath life, and fowl that may fly above the earth in the open firmament of heaven.

1:21 And God created great whales, and every living creature that moveth, which the waters brought forth abundantly, after their kind, and every winged fowl after his kind: and God saw that it was good.

1:22 And God blessed them, saying, Be fruitful, and multiply, and fill the waters in the seas, and let fowl multiply in the earth.

1:23 And the evening and the morning were the fifth day.

1:26 And God said, Let us make man in our image, after our likeness: and let them have dominion over the fish of the sea, and over the fowl of the air, and over the cattle, and over all the earth, and over every creeping thing that creepeth upon the earth.

1:28 And God blessed them, and God said unto them, Be fruitful, and multiply, and replenish the earth, and subdue it: and have dominion over the fish of the sea, and over the fowl of the air, and over every living thing that moveth upon the earth.

1:29 And God said, Behold, I have given you every herb bearing seed, which is upon the face of all the earth, and every tree, in the which is the fruit of a tree yielding seed; to you it shall be for meat.

1:31 And God saw every thing that he had made, and, behold, it was very good. And the evening and the morning were the sixth day.