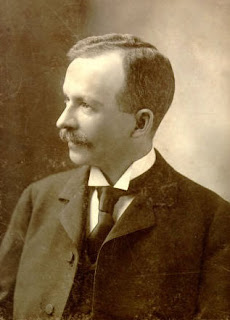 Charles W. Chesnutt at 40
____________________________________________________
About ten years ago my wife was in poor health, and our family doctor, in whose skill and honesty I had implicit confidence, advised a change of climate. I was engaged in grape-culture in northern Ohio, and decided to look for a locality suitable for carrying on the same business in some Southern State. I wrote to a cousin who had gone into the turpentine business in central North Carolina, and he assured me that no better place could be found in the South than the State and neighborhood in which he lived: climate and soil were all that could be asked for, and land could be bought for a mere song. A cordial invitation to visit him while I looked into the matter was accepted. We found the weather delightful at that season, the end of the summer, and were most hospitably entertained. Our host placed a horse and buggy at our disposal, and himself acted as guide until I got somewhat familiar with the country.

I went several times to look at a place which I thought might suit me. It had been at one time a thriving plantation, but shiftless cultivation had well-nigh exhausted the soil. There had been a vineyard of some extent on the place, but it had not been attended to since the war, and had fallen into utter neglect. The vines--here partly supported by decayed and broken-down arbors, there twining themselves among the branches of the slender saplings which had sprung up among them--grew in wild and unpruned luxuriance, and the few scanty grapes which they bore were the undisputed prey of the first comer. The site was admirably adapted to grape-raising; the soil, with a little attention, could not have been better; and with the native grape, the luscious scuppernong, mainly to rely upon, I felt sure that I could introduce and cultivate successfully a number of other varieties.

One day I went over with my wife, to show her the place. We drove between the decayed gate-posts--the gate itself had long since disappeared--and up the straight, sandy lane to the open space where a dwelling-house had once stood. But the house had fallen a victim to the fortunes of war, and nothing remained of it except the brick pillars upon which the sills had rested. We alighted, and walked about the place for a while; but on Annie's complaining of weariness I led the way back to the yard, where a pine log, lying under a spreading elm, formed a shady though somewhat hard seat. One end of the log was already occupied by a venerable-looking colored man. He held on his knees a hat full of grapes, over which he was smacking his lips with great gusto, and a pile of grape-skins near him indicated that the performance was no new thing. He respectfully rose as we approached, and was moving away, when I begged him to keep his seat.

He resumed his seat with somewhat of embarrassment.

"Do you live around here?" I asked, anxious to put him at his ease.

"Do you know anything about the time when this vineyard was cultivated?"

"I am looking at it," I replied; "but I don't know that I shall care to buy unless I can be reasonably sure of making something out of it."

"Is what?" I asked, not grasping the meaning of this unfamiliar word.

He imparted this information with such solemn earnestness, and with such an air of confidential mystery, that I felt somewhat interested, while Annie was evidently much impressed, and drew closer to me.

"How do you know it is bewitched?" I asked.

"I wouldn' spec' fer you ter b'lieve me 'less you know all 'bout de fac's. But ef you en young miss dere doan' min' lis'n'in' ter a ole nigger run on a minute er two w'ile you er restin', I kin 'splain to yer how it all happen'."

We assured him that we would be glad to hear how it all happened, and he began to tell us. At first the current of his memory--or imagination--seemed somewhat sluggish; but as his embarrassment wore off, his language flowed more freely, and the story acquired perspective and coherence. As he became more and more absorbed in the narrative, his eyes assumed a dreamy expression, and he seemed to lose sight of his auditors, and to be living over again in monologue his life on the old plantation.

"'How you like de nigger I sole you las' spring?'

"Is that story true?" asked Annie, doubtfully, but seriously, as the old man concluded his narrative.

"But I thought you said all the old vines died."

I bought the vineyard, nevertheless, and it has been for a long time in a thriving condition, and is referred to by the local press as a striking illustration of the opportunities open to Northern capital in the development of Southern industries. The luscious scuppernong holds first rank among our grapes, though we cultivate a great many other varieties, and our income from grapes packed and shipped to the Northern markets is quite considerable. I have not noticed any developments of the goopher in the vineyard, although I have a mild suspicion that our colored assistants do not suffer from want of grapes during the season.

I found, when I bought the vineyard, that Uncle Julius had occupied a cabin on the place for many years, and derived a respectable revenue from the neglected grapevines. This, doubtless, accounted for his advice to me not to buy the vineyard, though whether it inspired the goopher story I am unable to state. I believe, however, that the wages I pay him for his services are more than an equivalent for anything he lost by the sale of the vineyard.

This story originally appeared in The Atlantic Monthly (August 1887)
Posted by Jennifer at 10:54 AM