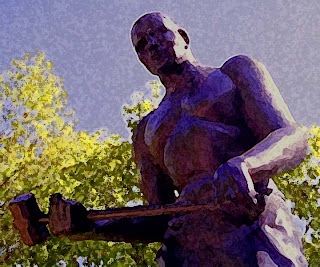 John Henry was a railroad man,
He worked from six 'till five,
"Raise 'em up bullies and let 'em drop down,
I'll beat you to the bottom or die."

John Henry said to his captain:
"You are nothing but a common man,
Before that steam drill shall beat me down,
I'll die with my hammer in my hand."

John Henry said to the Shakers:
"You must listen to my call,
Before that steam drill shall beat me down,
I'll jar these mountains till they fall."

John Henry's captain said to him:
"I believe these mountains are caving in."
John Henry said to his captain: "Oh, Lord!"
"That's my hammer you hear in the wind."

John Henry he said to his captain:
"Your money is getting mighty slim,
When I hammer through this old mountain,
Oh Captain will you walk in?"

John Henry's captain came to him
With fifty dollars in his hand,
He laid his hand on his shoulder and said:
"This belongs to a steel driving man."

John Henry was hammering on the right side,
The big steam drill on the left,
Before that steam drill could beat him down,
He hammered his fool self to death.

They carried John Henry to the mountains,
From his shoulder his hammer would ring,
She caught on fire by a little blue blaze
I believe these old mountains are caving in.

John Henry was lying on his death bed,
He turned over on his side,
And these were the last words John Henry said
"Bring me a cool drink of water before I die."

John Henry had a little woman,
Her name was Pollie Ann,
He hugged and kissed her just before he died,
Saying, "Pollie, do the very best you can."

John Henry's woman heard he was dead,
She could not rest on her bed,
She got up at midnight, caught that No. 4 train,
"I am going where John Henry fell dead."

They carried John Henry to that new burying ground
His wife all dressed in blue,
She laid her hand on John Henry's cold face,
"John Henry I've been true to you."