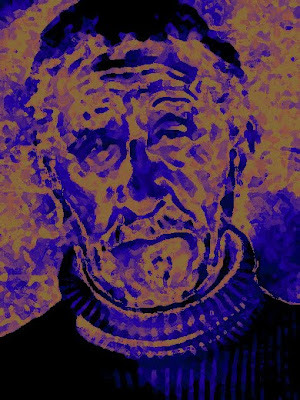 Doaker
Doaker has a discreet presence in the play The Piano Lesson, by August Wilson, and it would be easy to write him off as a somewhat straightforward and inconsequential character. However, a closer look would reveal that in the persona of Doaker, Wilson has actually created a fully developed character with a complexity all its own.

Doaker Charles is described as a forty-seven-year old man “with severe features” (809) who has been working for the railway for twenty-seven years. He has a house which he shares with his niece Berniece and her daughter Maretha and where all the drama of the play takes place. We find out that he has had a wife, Coreen, but they are now separated or divorced and she lives in New York City. There is certain mysteriousness around the story as well as around Doaker’s relation to women in general. According to Boy Willie, his nephew, Doaker used to be or is still very popular with women, and we cannot know to what extent what he says is true, but it is clear that at the time of the action in the play Doaker is well accustomed to living on his own and apparently has no thoughts of chasing women. In several scenes we see him cooking, ironing, etc. so it appears that he does most of the household work (additionally, he works as a cook) and the other characters seem to take that as natural. There is no question of a diminished masculinity here, the fact that Doaker works around the house, I would say, only adds to the dignity he enjoys in the eyes of others.

Again from Boy Willie we find out that Doaker is respected in the black community they all came from, probably because of his job in the railway. Doaker also takes great pride in his work and we can imagine how it must have been more of a big deal earlier, when he was younger and when black people rarely had steady jobs. Doaker has managed to win his independence, to move north and have his own house and reliable income, and that was a great achievement for a black person at the time, which immediately distinguished and separated him from the community as someone to look up to. He is the complete antipode to his brother Wining Boy and his insecure, gambling, adventurous, haphazard way of life. Doaker may be seen as the epitome of sobriety and moral firmness in the play, when compared to the other male characters, although he was not always an angel. For instance, he took part in the family theft of the renowned piano which is the centre of conflict in the play, but perhaps he did that driven by the sense of family loyalty, the same sense, or generosity, which motivated him to admit under his roof Berniece and Maretha for whom he cares and provides support.

Doaker has a very realistic view on life and the people around him; sometimes he even exhibits an ironic trait, like for example when he talks about Avery’s epiphany (827) or when he denigrates Wining Boy for visiting them only when he is broke. However, in the end he still supports Avery in setting up his church and lets him bless the house to drive away Sutter’s ghost, and still gives money to Wining Boy, which shows that he has a warm heart and understands people, their flaws and their dreams. The speech he makes about the railroad on page 820 reveals a contemplative side of Doaker. He knows that people travel in search for a better life; however, to him this only means that they are trying to run away from their existing lives and problems…and what they come up against most of the time are disappointments. Therefore, in his view it is better to stay in one place and play with what you have and try to make the best of it. That is exactly what he is doing and hence he is the centre of stability in the play.

In the conflict between Berniece and Boy Willie, Doaker plays the role of mediator. Although he tries to remain as disinterested and as impartial as possible, he is inevitably drawn in the arguments and sometimes forced to take a side. He never refutes the legitimacy of the claim both Berniece and Boy Willie lay on the piano, but sometimes it seems like he supports Berniece more. However, at one point he states his opinion clearly that Berniece should let go of the past, sell the piano and marry Avery. Nevertheless, he remains respectful of her wishes until the end and even exerts his authority to stop Boy Willie and Lymon from taking the piano out of the house.

Finally, Doaker is an altogether positive character, a caring person that in a way provides shelter and support for all the other members of his family circle. He tells the history of the family to Lymon, his is the house everybody comes back to, he is the one they can always rely on in times of distress to fill them with a sense of belonging and create a consciousness that they at least have a secure base they can start from and build upon.

Grace
Lymon most succinctly describes the type of women Grace represents: “Mostly they be lonely and looking for somebody to spend the night with them. Sometimes it matters who is it and sometimes it don’t” (857). Although she is a minor character that appears in the play only on two occasions, she is set to be a counterpart to Berniece. Contrary to Berniece’s independence, loftiness and reserve when it comes to men, Grace is one of those girls who go out in the bars in a constant search for some love and male companionship. When she meets Berniece the night when they come to Doaker’s house together with Boy Willie, she plays the dignified, and she probably does put on an attitude of a girl with morals and principles. This is doubtful though, since she spends one night with Boy Willie, goes out with Lymon the following day and we hear of a previous boyfriend she used to live with who still has a key to her apartment. However, I believe that she is a good and naïve girl at bottom who will probably find a husband in the end and get settled.