American Literature: The Piano Lesson Notes--Scenes Added to and Changed in the Film Version 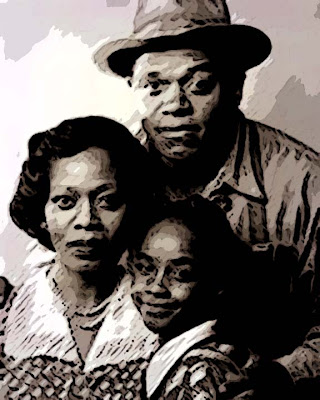 Numerous exterior shots of the Charles’ Pittsburgh home and in and around Pittsburgh.

The viewer hears the actual songs instead of just the lyrics that appear in the play script.

Opening scene. Lymon and Boy Willie are riding in the truck filled with watermelons, which, at first, is kind of shocking, given the negative connotations of associating African Americans with watermelons. The actor Charles Dutton was a bit surprised as well and actually questioned August Wilson about it.

Doaker “sees” Sutter’s ghost. The piano plays on its own, which we don’t quite see until later in the play. We also see Doaker’s gun, which becomes pivotal later on, when Berneice threatens Boy Willie with it.

Throughout the film, we see and hear evidence of Sutter’s 340-pound ghost, but we don’t SEE him. However, at various times, Doaker, Maretha, Avery, Boy Willie, Wining Boy, Berniece, Lymon, and Grace do see something of the supernatural.

Back in Mississippi, shows the truck breaking down; the stereotype of African Americans being associated watermelons is emphasized, almost shocking.

Maretha playing the piano (albeit badly).

Flashback scene depicting the family story about the Ghosts of the Yellow Dog.

No main dialogue among the characters in the flashback scene; Doaker acts as a voice-over (with some music in the background. This is not exactly an added scene because in the play itself, Doaker does tell the family story in great detail.

Most dramatic scene: Boy Willie and Lymon show up at Avery’s job and teases him (Boy Willie wants info about the piano buyer who had showed up a while back at Doaker’s home and offered to buy the piano from Berniece). This scene was hilarious, Avery so stiff, yet so obviously upset with his friends for seeing him in his role as a subservient worker in the white man’s world.

Streets of Pittsburgh--Boy Willie and Lyon negotiate with a mechanic to get the truck fixed.

Exterior (in a garden, probably at Doaker’s home, since Wining Boy seems to be homeless):

INVERTED STEREOTYPE! Now the opening watermelon scene makes sense as Boy Willie and Lymon hawk watermelons in a white neighborhood. These two guys are clearly in control of the situation as they show their sales’ acumen. Brilliant scene! This doesn’t come across as well in the play.

To sell the watermelons, Lymon and Boy Willie used an old technique called the “field holler,” which in the slave days, slaves used to impart important information that they didn’t want to be known by the overseers and slave owners. In slave days, sort of a sung back-and-forth dialogue that was “coded.”

Berniece at work in the rich white employer’s home.

Movie theater, where Boy Willie and Lymon pick up Grace and Dolly.

Interior of a poker hall:

Wining Boy’s poker game, where he loses his money (the money Doaker loaned him and the money he received from selling the green silk suit to Lymon).

In the film, when Boy Willie tries to move the piano, Doaker has a gun at his side; in the text, he’s just standing in the doorway (pages 861-862). On the other hand, in both play and film, Berniece gets Crawley’s gun (also foreshadowed in the play, page 863, and “shown” as her hand on her pocket on page 870), hides in her pocket (again, we don’t quite see it.)

Avery in his church as he gathers the materials needed to chase away a ghost.

References to the play script are from: